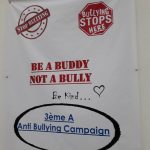 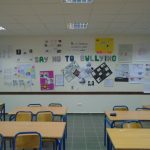 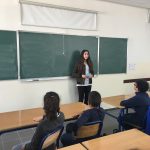 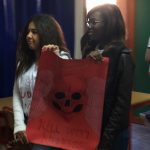 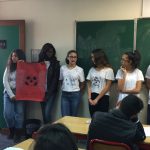 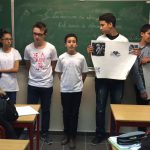 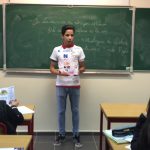 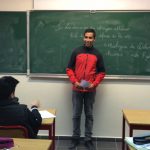 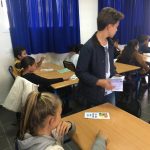 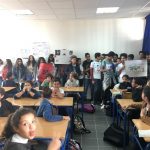 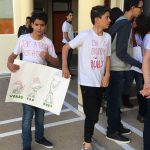 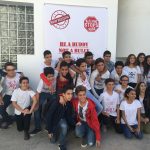 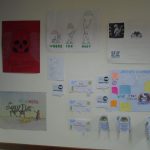 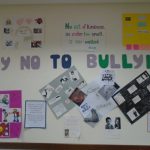 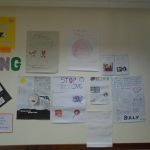 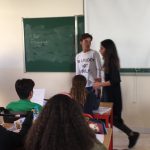 In November, we created a campaign against bullying. The objective of this project was to promote kindness and not bullying.

To make this project happen the class was separated in many groups to create : the flyers, the posters, the speeches, the contracts and the compliments. I was in the « compliment » group. We had to make little cards where nice things to do are written, like – clean someone’s room or buy someone a drink. The students of the other classes appreciated these cards, they thought that it was kind of funny. We also created some free compliments that we left in the classes that we visited. These compliments served to spread kindness all over the school.

During this project, I learned many things about bullying but especially that words can hurt. When we talk about someone, gossip or laugh, we don’t think about the dangers and how we can hurt others. I learned that there are two types of bullying and what bullying is. Bullying is the fact of using force, over and over to make someone do something. Bullying is a very hard thing to endure. Through the experiences of others we wanted to make people aware of bullying by giving out informative flyers. We wanted to teach people how they should act if they see bullying happening and if they are bullied.

Everyone has a role in bullying. The most important thing to do if you see bullying is to talk to an adult. I think that people should also socialize a little bit more. That’s why we created our campaign T-shirts, we wrote a slogan on it « Be a Buddy not a Bully ! ». This campaign was a really great experience. I learned a lot about this subject, that it is important for everybody. We all have to say NO to bullying! We need to be respectful, kind and friendly.

In the beginning, the idea of talking in front of the other classes was a little bit hard for me but I realized, in the end, that it was not a big deal. There was a good atmosphere during this project. I am very thankful for this, It was a nice change from the other activities like in the book or the workbook.

We created an anti-bullying campaign with all the classes of 3e. Our objectives were to make people aware of this huge problem and teach them what to do if they see it.

We talked about it, we explained it and we debated it. I was very surprised because, I realised that older classes didn’t know a lot of things about bullying and some of them practiced it. Also that the younger classes like « 6e » or « 5e » were very worried about this problem, some of them taught me some information. I cant forget this young boy who was talking, and everybody was quiet and we were listening to him tell us a story. He was talking about the problem like he had lived it. Another thing that impressed me is the investment and the participation of everybody. We all had an important role to play in this campaign. For example, I found our slogan, printed 300 flyers and 1 banner for us. Other people had to make posters against bullying, make compliments, make contracts and we all made tee-shirts.

What did I learn during this campaign?

I learned that no one is perfect, everybody can make mistakes and be a bully once in their life, but everybody can get a second chance and everybody can decide to change. However, it’s not easy to change like this ! That’s why some people like Mrs.Traumat are here to make us aware and take people through this project. It showed us that everybody, every student, has the power to educate people  about a huge problem like bullying.

Bullying is unwanted, aggressive behavior among school aged children that involves a real or perceived power imbalance. Both kids who are bullied and who bully may have serious, lasting problems.

Jenna is a 14 years old teenager. She had just moved to Manchester. She was excited to see her new school and make new friends. To her surprise, people weren’t very nice. As she went on with her day, people were pointing, staring and laughing at her. She tried talking to other students but they ignored her. As the days passed, it only got worse. They mocked her appearance, her personality, her clothes, the way she talked, her background… This had an effect on her mental health: she lost confidence in herself, she stopped being herself, she changed completely. She started self-harming.

One day, she had had enough. When she got back from school, she decided to hang herself. Suddenly, her mother came in the room. She was shocked to see her beloved daughter gasping for air. She quickly removed the rope from her neck and called for help. They took her to the ER. Thankfully, she survived. Her mother entered the hospital room. She was crying and at a loss for words. She was wondering why her daughter tried to end her life. Her whole family was devastated and shocked. After taking some rest, a psychiatrist talked to Jenna. They just found out that she was getting bullied and that it was the reason behind her attempted suicide.

Jenna was going to stay in the hospital for a little while to fully recover. Her mother, on the other hand, wanted to do something about this, and hopefully, put an end to it.

The next morning, she went to her daughter’s school, and talked to the principal, who thought all the students should know about this. During the assembly, he talked about what bullying is, and all the consequences it could lead to: loss of self – confidence, isolation, sadness, loneliness, self-harm, thoughts of suicide, and in some cases, suicide. A lot of students confessed that they witnessed the bullying, but they never had enough courage to do something about it. The principal understood that sticking up for someone who’s getting bullied takes a lot of courage, but it could also help the person getting bullied feel less alone and even save their life. He also told them that they should tell a trusted adult. Some of the bullies felt bad, and explained that the reason behind these acts was that they wanted to be more relevant, and wanted their friends to think they’re cool and funny. Others said their own insecurities pushed them to do this.

After this very informative assembly, a lot of lives have been changed, A loving community has been created. After a few months, Jenna came back to school. The emotional scars of her bullying experience are there to stay, but she won’t let them keep her from moving forward.

Bullying is a very hard thing to endure, and it can lead to lasting psychological problems. We can prevent this by being kind to each other and sticking up for each other.

We build ourselves as teenagers, bullying breaks us.

The majority of people who bully other people do this to feel superior, most of the time it’s out of jealousy but the consequences of these bad thoughts can ruin a person’s life.

There are also the people who bully other people because they have also been bullied. You think these are just beautiful sentences to attract your attention but these are the words of a girl who finally spoke but too late…

My name is Eva , it all started in the last year of junior high school with an insult of one or two girls for a stupid reason. Alone ,I was an easy target. Insults during classes, isolation during break. When I wanted to talk about it, the teachers thought that was  »a normal way to build character ». The bullying continued stronger than ever. Anonymous phone calls, insults on Facebook in the eyes of all, I felt humiliation. A year like this, my confidence broke. I started telling myself that I was the problem and hating myself.

Later in High school I met real friends but it took three years to give them my trust. After that, I saw some people from my junior high school again. I asked them if they knew they had hurt me and why did they come to talk like we had always been friends. Their answers ?  »It was simply a game » or  »We did just like the others ». This isn’t an excuse! Doing it because you are with another person…it hurts ! It’s like hitting someone who’s already on the floor.

Copying a person doesn’t make us innocent of hurting someone. We can’t change our past, but together we can change the future of our brothers, sisters and friends. And now we have to talk about it.

Bullying can attack a person mentally or physically or even both. The consequences of this are : difficulties at school, failing the year, no more self-confidence, the developement of a bad attitude, isolation, humiliation, physical troubles and all of that can lead to suicide.

If you see a person bullied, you must act by helping him, defending him and warning an adult Not copying others who bully  »just to laugh ». Respect for each other, acceptance of differences and learning about citizenship. The law of the jungle can’t govern relations between pupils.